Obama Requests Another $50 Billion in State and Local Aid

Concern over the nation’s mounting debt could snarl the passage of President Barack Obama’s proposal to provide more aid to state and local governments hit by the economic downturn.

Mr. Obama on Saturday sent a letter to lawmakers calling for swift action to help U.S. small businesses and state and local governments facing budget cuts, as the country grapples with the after-effects of the global financial crisis. He didn’t specify in the letter where funds would come from, but he said he had called for a three-year freeze in non-security discretionary spending.

“It is essential that we continue to explore additional measures to spur job creation and build momentum toward recovery, even as we establish a path to long-term fiscal discipline,” Mr. Obama said in the letter to congressional leaders, a copy of which was seen by The Wall Street Journal. “At this critical moment, we cannot afford to slide backwards just as our recovery is taking hold.”

States in the Red 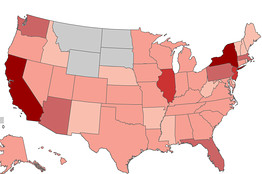 Most states have addressed or still face gaps in their budgets, while tax revenue declined in the final quarter of 2009.

The letter said the economic impact of budget cuts at the state and local levels were leading to “massive layoffs of teachers, police and firefighters,” and that 84,000 jobs in state and local governments had already been lost so far this year. Mr. Obama said “hundreds of thousands of additional jobs” could be lost if further action is not taken, according to the letter.

The White House didn’t respond to a request for comment on Sunday. In response to steep declines in sales and income taxes, states have reduced spending and lifted taxes and fees during the past two budget years. Unlike the federal government, all U.S. states except Vermont have at least a limited requirement to balance their budgets.

Thirty-nine states say they expect lower general-fund spending for the coming fiscal year, which begins July 1 for most states, than for the fiscal year ended June 30, 2008, according to a report released last week by the National Governors Association and National Association of State Budget Officers.

Most states passed their budgets assuming Congress would come through with additional funding for Medicaid, the joint federal-state health program for the poor and disabled. But the aid hasn’t been approved, and its passage is uncertain. Without the supplemental Medicaid funds, states will have to cut their budgets further.

Some large states are still grappling with gaping deficits. The New York state legislature plans to vote Monday on an emergency spending bill, proposed Friday by Democratic Gov. David Paterson, that calls for more than $300 million in cuts to state mental-health and social services. New Jersey Gov. Chris Christie, a Republican, wants cuts in state aid to local governments, schools and others, as the state tries to close an $11 billion deficit. In California, Gov. Arnold Schwarzenegger, a Republican, has proposed eliminating the state’s welfare program and making other deep cuts to eliminate a $19 billion deficit.

The issue poses a quandary for policymakers, who want to boost the economy and create more jobs ahead of midterm elections in November, but worry about increasing the federal government’s record budget deficits. Polls have suggested that voters are concerned about both issues.
The U.S. has run 20 straight monthly budget deficits.

Rep. Steny Hoyer (D., Md.) acknowledged that there was spending fatigue around the country. “People are concerned about the debt level, and we are, as well,” he said on “This Week.” “But clearly, you cannot not continue to stimulate an economy that is still struggling to get out of the deep ditch that we found it in about 18 months ago.

—Amy Merrick contributed to this article.

(Recorded on 01/19/21) Topics covered on this video coaching call America has once again, in recent months, reminded the world of its state of terminal economic and political decline. In this special video presentation, trading coach Jerry Robinson shares how you can...