Obama and the Fiscal ‘Road to Hell’ – Karl Rove

At last week’s G-20 meeting, President Barack Obama achieved a two-fer. He suffered a significant international defeat, and he increased the chances his party will suffer a major domestic one this fall.
Mr. Obama’s international defeat was self-inflicted. He went to Toronto to press other major nations to do as he has done: Expand government spending, or suffer, in the president’s words, “renewed economic hardship and recession.” 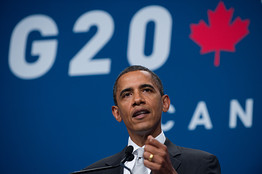 President Barack Obama speaks at the G20 Summit in Toronto
Canada, Germany, Great Britain and most other countries declined Mr. Obama’s invitation. The German economic minister “urgently” prodded America to cut spending at a press conference on June 21, prior to the G-20 meeting. The president of the European central bank took direct aim at Mr. Obama’s argument, telling the Italian newspaper La Repubblica on June 16 that “the idea that austerity measures could trigger stagnation is incorrect.”

The European Union president, Czech Prime Minister Mirek Topolanek, tore into Mr. Obama’s stimulus and other spending policies in a stunning address to the European Parliament in March 2009, calling them “the road to hell” and saying “the United States did not take the right path.”

The other flaw in his G-20 appearance is domestic. The president’s statements that more deficit spending was “necessary to keep economic growth strong” and his cautioning against “the consequential mistakes of the past” when stimulus spending “was too quickly withdrawn” puts his administration and party squarely in favor of policies unpopular with most Americans.

Since 2000, the Gallup organization has asked voters what they believe will be the most important problem for the U.S. in 25 years. This year Americans are saying the challenge will be the deficit. And last month, almost eight in 10 voters surveyed by the Associated Press called the federal budget deficit an “extremely” or “very important” issue.

There was more bad news Tuesday for Democrats from recent focus groups conducted in battleground congressional districts in Iowa, Ohio, New Jersey, Arkansas and Florida.
A report on these focus groups issued this week by Resurgent Republic (a group I helped found) showed that both political independents and tea party participants passionately denounced federal spending and deficits, using words like “reckless,” “out of control,” “unnecessary” and “unhelpful.” The evidence suggests that both groups remain deeply skeptical of Mr. Obama’s stimulus package and are unpersuaded by the administration’s arguments in its favor.

The authors of the Resurgent Republic study concluded that both independents and tea party voters believe “nearly unanimously” that reckless government spending, not lack of tax revenues, is responsible for the deficits. This goes to the very heart of the modern Democratic agenda with its guiding philosophy of bigger government and higher taxes.

All of this negative news is wearing on the president. At the G-20’s concluding news conference, Mr. Obama—brittle and petulant—attacked GOP critics “who are hollering about deficits,” saying he would be “calling their bluff” next year by “presenting some very difficult choices.” Then “we’ll see how much of . . . the political arguments they’re making right now are real, and how much of it was just politics.”
The president’s problem is largely a mess of his own making. Deficit spending did not begin when Mr. Obama took office. But he and his Democratic allies have supported, proposed, passed or signed and then spent every dime that’s gone out the door since Jan. 20, 2009.

Voters know it is Mr. Obama and Democratic leaders who approved a $410 billion supplemental (complete with 8,500 earmarks) in the middle of the last fiscal year, and then passed a record-spending budget for this one. Mr. Obama and Democrats approved an $862 billion stimulus and a $1 trillion health-care overhaul, and they now are trying to add $266 billion in “temporary” stimulus spending to permanently raise the budget baseline.

It is the president and Congressional allies who refuse to return the $447 billion unspent stimulus dollars and want to use repayments of TARP loans for more spending rather than reducing the deficit. It is the president who gave Fannie and Freddie carte blanche to draw hundreds of billions from the Treasury. It is the Democrats’ profligacy that raised the share of the GDP taken by the federal government to 24% this fiscal year.
This is indeed the road to fiscal hell, and it’s been paved by the president and his party. Voters will have their chance this November to render their verdict on the Obama years. No wonder Republicans feel confident these days.

Mr. Rove, the former senior adviser and deputy chief of staff to President George W. Bush, is the author of “Courage and Consequence” (Threshold Editions, 2010).

END_OF_DOCUMENT_TOKEN_TO_BE_REPLACED

Segment 1: Inflation and You SEGMENT BEGINS AT 00:43 Unless you’ve been under a rock the last few months, you know that prices are rising. Inflation surrounds us at every turn. Economist Jerry Robinson lays out the facts about inflation and its contributing...

END_OF_DOCUMENT_TOKEN_TO_BE_REPLACED

PODCAST: Sell In May and Go Away?