Number of the Week: Euro Zone Debt Is Coming Due

Throughout the recession and recovery, many European banks have sought to sweep their problems under the carpet in the hopes that they could solve them in a better and more profitable future. Now, though, they’re running out of time.

As investors fret about European banks’ exposures to Greece and other financially troubled countries, those banks’ borrowing costs are rising sharply. That wouldn’t be a problem if they didn’t need to borrow, but as it happens they need to borrow quite a lot: This year and next, some $1.7 trillion in euro-area bank debt will come due, far more than among banks in the U.S., the U.K. or elsewhere. 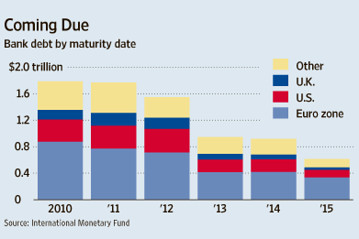 If banks are forced to renew those borrowings at high interest rates, the resulting debt-service costs will make it still more difficult for them to earn their way out of their troubles. If they choose not to refinance, they’ll have to sell assets and cut back on lending — anathema to European economies still struggling to recover.

Given the stakes involved, it’s surprising that European bank regulators aren’t being more forthcoming with details of the stress tests aimed at restoring confidence in the region’s banking system. So far, investors are being left in the dark as to what many of the key assumptions in the tests’ various scenarios will be — including how much debt holders will lose if Greece, Spain and other countries default on their government bonds.

For the sake of the banks and the broader economy, a little more openness would be a good idea.

END_OF_DOCUMENT_TOKEN_TO_BE_REPLACED

Segment 1: Are You Prepared for an Emergency? SEGMENT BEGINS AT 00:47 We have stressed the importance of preparation for many years here at Follow The Money. Jerry Robinson devotes this segment to urging listeners to implement a solid plan to protect themselves and...